Yes, I thought it was great too. Since everyone else has already talked about the CFI 6-7-8 conference, there’s not much else I can say. I would like to add my thanks, however, and kudos to the staff at CFI for the hard work. About the only way it could’ve been better would be for CFI to send us on an all expenses paid trip :). Life is good and thanks to Eloise Owens for helping me remember there is a bigger wave.
On another subject, I brought my 10-year old daughter to critique group this week. She came to play with the host’s kids, but they had something else come up. My daughter decided to sit in with us, and since we were missing one member, we gave my ten-year old copies of our chapters.

She followed along with us and made comments on the manuscripts. I’m told she caught some things we didn’t see, but she was too shy to talk about it. I asked her how she liked critique. She said she really liked Nichole’s new book.

I’ve got to tell you I’m impressed. First that my daughter has a working knowledge of what makes good writing, and second; Nichole’s new YA fantasy holds her attention. I have told my daughter she can’t see the new Narnia movie until she reads the book first—she chooses not to—which gives you an idea of how good Nichole’s new book is going to be.

What can I say? I’m a proud father, but it occurs to me that our next generation will be wonderful writers. I hope they choose to be.
Now onto the third matter, I’ve been posting entries that I call The Dead Authors Society. This week I was planning to start A tale of Two Cities, but I put it aside because of prior reading commitments. I still haven’t gotten to Frankenstien by Mary Shelly, Fahrenheit 451 by Ray Bradbury is waiting in the wings, and there is still Moby Dick.
I’ve seen summer reading lists posted on other blogs and it occurred to me, I could do the same thing with my old classics. You can read along and we can talk about them. I’m going to compile my list, but for now, look above.
I did want to not 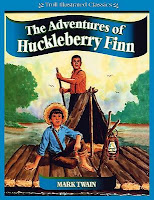 e, however, that even though much of what he wrote is not politically correct by today’s standards, I admire Mark Twain. In Huckleberry Finn, he dealt with the slavery question at a time when his opinions might have gotten him hanged. He did it through the eyes of young white boy and the message is still poignant today. Even though the language is hard to read sometimes, Huckleberry Finn is a good read.
Good luck in your writing—see you next week.
Posted by Keith N Fisher at 5:56 AM

I haven't read all of the classics you mention, but a fair share. I read Farenheit 451, probably when I was in junior high, along with The Martian Chronicles. I think stories like that are responsible for helping me to "become a thinker." (Or perhaps I read stories like that because I already was one. Hmm.)

If you're going to read about Huck Finn, I suggest reading Tom Sawyer. I liked it better than Huck Finn, although Huck Finn is in it.

Frankenstein is a good read, but, shame on me, I haven't read the other ones you mention--oh, except for Narnia. That whole series is very good. Gets kind of bizarre at the end, but bizarre is a good thing for me.

Some classics, like Alice in Wonderland, I just don't get, tho. I couldn't get very far into that one.

H. G. Wells is great, too, if you're a sci-fi fan. The original War of the Worlds and The Time Machine are hard to beat, especially when you consider when they were written.

Anyway, ood luck with your daughter. Sounds like she's heading down the right path. And Nichole is a great children's writer. She should like her stuff.

What a neat experience for your daughter--and you.

I take it that the Dead Authors Society doesn't include only dead authors, then? I love Ray Bradbury. It'll be a sad day when he dies, and that day can't be too far off, because he's getting up there in age.

Keith,
Hope you get to A Tale of Two Cities soon. It's a touching story, but in typical Dickens' fashion, has quite a lot of description.

And no doubt, you will recognize an oft-quoted phrase toward the end.

Thanks for stopping by and for commenting. Yeah I liked Tom sawyer too Darvel, but Hucklberry Finn is a great read because of the way Twain dealt with the racial specifically slave issue.

How Right you are Annette. Maybe I should pull Ray Bradbury from the list but I included Farenheit 451 because it was required reading in High school and I got out of reading it. My Dead authors society is mostly for classics. Thanks for noting that Ray Bradbury is still alive and publishing.

Thanks Cindy for commenting. I still haven't gotten back to tale of two cities yet but It was the best of times, it was the worst of times. I have a lot to read.