Happy Father's Day -- Give Your MC a Dad

I'm typing this on Father's Day though it won't post until the day after, but I wanted to write something Father-ish. 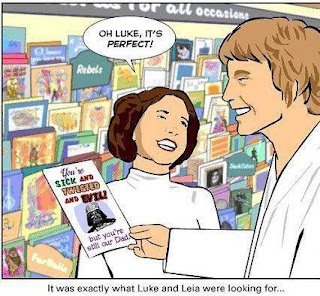 There seems to be a long-standing tradition in story-telling to have your hero without a parent or a father. Frodo didn't have one. Harry Potter didn't have one. Luke Skywalker technically didn't have one. A lot of other books written nowadays seem to lack fathers to the point that the orphan/hero story is turning cliche. I think this is fine and dandy as long as it aids the plot,as it did in all the ones mentioned above. If it does't add to the plot I'm going to encourage you to give your hero or heroine parents.

This can actually help your characters. I'll liken this to when I used to date. I always paid attention to how my dates would treat their parents and other family members. I would be leery of dates that treated their parents or siblings with disdain and disrespect. Why? Because if your date treats their loved ones like this then imagine how this person will treat you once the "honeymoon period" is over. I liked dates who were respectful to their family; I bailed on the ones who didn't.

I'm not saying your main characters have to hero-worship their parents. But if your character treats their parents with respect, even if he or she doesn't agree with what is being said, then it will go a long way towards building likability in your character. Having parents and a family is a good way to get to know and eventually root for your character. You can use the interactions with the MC's family members to really learn who your characters are and is a great way to show and not tell a character's personality.

One example is Marty McFly from the Back to the Future franchise. Even when his parents were losers and pushovers he still treated them with respect. Of course, having parents were a major part of the plot, but in trying to save their love it helped you root and cheer for him hoping that George would kiss Lorraine at the Fish Under the Sea Dance (no, no, it was the Enchantment Under the Sea Dance). 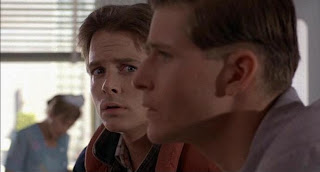 Though we didn't see it until the second movie, Biff (the villain) treated his parents differently as he yelled at his mother while leaving to go to the dance. It made us not cheer or identify with Biff. It made us loath him. And, sure enough, he treated those around him with the same manner of disrespect.
Posted by Unknown at 12:30 AM

good points. I think that writers leave out parents because of laziness. (another character to outline for) Its just easier to write them out or just not mention them. Of course sometimes parents are not pertinent to the plot.

You have a fabulous blog! I’m an author and illustrator and I made some awards to give fellow bloggers whose sites I enjoy. I want to award you with one of my homemade awards: the Brilliant Writer Blog Award. There are no pass along requirements. This is just to reward you for all the hard work you do!

Go to http://astorybookworld.blogspot.com/p/awards.html and pick up your award.
~Deirdra

I wish there were more parents in books, too. Middle grade and young adult books especially have a huge lack of strong parents. But I have heard quite a bit that one of the reasons why is because in order for us to create strong main characters, a lack of parents helps because it forces our main characters to make decisions on their own, to be independent, etc. But I don't think that has to be the case all the time. Some of my favorite parents in recent books are Ron Weasley's parents in the HP books. Of course, most of the time Ron is away at school and can therefore be independent and is one of the main supporting characters. But the whole parent thing is something I've thought a lot about so thanks for your post!

Definitely agree--and I love your example of the McFlys. There are so many tells an author can use to show who their character really is, and how they treat or think about their parents is a great one.