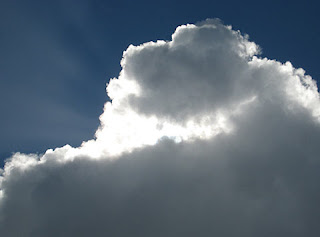 My day job is performed on the graveyard shift, so on days off, I can be found on my porch, at night, with the light burning. It’s a great time to write in peace and quiet. When insomnia keeps me awake during the day, I’m out there writing. This time of year, however, it’s hard to use it. The Sun’s position in the sky has changed. The roof doesn’t block the rays like in the summer. It’s hot and the glare renders my computer screen unreadable.

I’ve learned to love cloudy days. Not only do the clouds cancel the rays, but it’s also cooler. Not to mention, the romance and inspiration of possible intermittent rainfall.

So how is your writing going? Have you ever wondered why you felt a need to pursue such a non-lucrative career? One of my teachers in junior high told us, when asked, that he chose his occupation, because of the example of one of his teachers. He went on to curse that man, under his breath.

Like my teacher, do you curse the muse? Do you wonder why your characters won’t leave you alone? Do you edit your manuscript in frustration, thinking your story would be told better, if only you could write more effectively?

Of course, money, or the lack of it, enters into the question. I admit to envisioning large royalty checks, when I started. Making a living at my chosen occupation was part of the dream too. To be fair, though, it is possible, but not in the market I write for. So why do I do it? Why do you do it? I’m reminded of the first writer’s conference I attended and looking out on the sea of faces in the room. I realized they had all been touched with the same inexplicable need, and I was part of a large movement.

Now, I sit on my porch and wonder. Why do I feel such passion about writing? Should I do like my teacher and curse the muse for making me want to write? Its funny how our lives change over the passage of time, isn't it?

Okay, enough, of this heretical attitude. I am a writer because I want to be. How could I not? I’ve got a disease deep in my blood, and it won’t go away. Like alcoholism, my addiction is the source of great highs and lows. When I’m on the pinnacle of my writing, the highs are so exquisite, life could not be better.

Perhaps my bout of second-guessing is caused by fatigue. Could it be the cloudy day? After all, depression, in comic strips has always been depicted with a cloud above the depressed subject’s head. Still, I love cloudy days during this time of year.

Good luck with your writing---I hope I didn’t depress you---see you next week.