In one of Aesop’s fables, A fox who is starving, tries to get some grapes from high on the vine. He tries everything to get a bunch of grapes and fails. Finally he gives up and reasons that the grapes were probably sour anyway. We use the term, sour grapes to exemplify the fact that somebody thinks they were given a raw deal in favor of another. 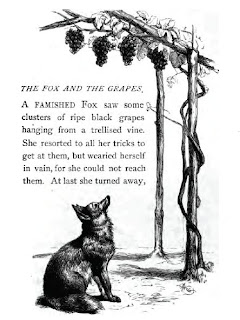 When we get rejected after working hard to sell our books, we can choose how to react or not. Rejection is part of life as a writer, so we keep trying. We submit it again, and we write something new. Or, we complain to everyone that our book was perfect, and the publisher made a huge mistake. I would hope we wouldn’t start railing on the agent or publisher, especially not in public.

That would be sour grapes.

In the February2013  issue of Writer’s Digest I read an interview with Jamie Lee Curtis. She is a movie star, and the author of ten published children’s books. She also, happens to be daughter of Janet Leigh and Tony Curtis. If you don’t know who they are, I’m sorry for you. Think about the shower scene in Psycho and Tony played many critically acclaimed roles like the Boston Strangler in 1968.

Anyway, the interviewer, Marcy Kennedy Knight, asked her, whether being famous helped her as a writer. Jamie left it up to the world to decide. She felt that being a public person does help you get looked at, and having famous parents may also have helped her in her acting career.

She went on to point out that people tell her the writing is great. Basically she was saying that being Jamie Lee Curtis might’ve got her foot in the door, but she does her best to deliver.

The ramifications of her story, and other famous people, turned writer, are obvious. Being who they were got them where they are. If we as writers trying to break into the business were somebody famous, We would have a better chance. People would read our books because of who we were.

We can choose to be bitter about that or not. If we choose the former, are we like the fox who complained the grapes were sour?

Jamie’s story is different, though. Being who she is might’ve got her the first contract, but getting nine more books published proves she is good. How many celebrities have written books that shouldn’t have been published? How many have you read? Being celebrities got them in the door, but I bet a self-respecting agent wouldn’t even consider a second book.

There is another type of writer who claims sour grapes. Have you ever read a book by a famous author and found myriad errors? Many authors get to the point where their grocery list could get published. They get lazy because they aren’t held to higher standards. How easy is it to develop sour grapes feelings when you get rejected for breaking a rule you’ve seen a famous author break?

Be glad you are held to a high standard. You are becoming a better author because of that measure. When you publish your tenth best seller, remember to write it well, no matter what your publisher will accept. Don’t be a fraud. When somebody excels (without paying their dues) in your field of endeavor, remember they had an unfair advantage. Someone helped them reach the grapes.