Writing Out of Time and Place

While thinking about what I want to share with you this week, I analyzed my activities for last week. I hoped to find a lesson I’d learned that would help you in your quest to be published in the LDS market. 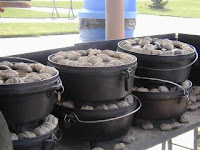 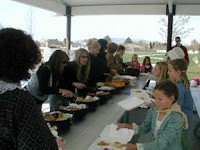 It was a busy week. I wonder how I survived. My wife and I cooked in Dutch ovens for the whole fourth grade, teachers, and parents as part of the Utah History unit. We made about six gallons of beef stew, six cobblers, and five 14-inch diameter cornbreads. There were 130 people, and I’m still sore from all the hard work.

Of course I learned a few lessons at the LUW spring workshop on Saturday, but my friend is going to blog about that and I don’t want to compete.

I think the big lesson for this week occurred to me in my critique group. I learned about perspective.

How many of you remember bench seats in cars? Did you know that bucket seats used to be a luxury? Unless your car was a sports car, bucket seats had to be ordered special. It never occurred to me that my readers might not know that, when I had a character slide next to my protagonist and put her arm around him. "What is she sitting on?" was the question someone asked.

Later in the week, I asked a friend to review a short piece for me and it became painfully clear that my frame of reference came from events that happened before she was born, therefore she didn’t understand my point.

I realized my writing should be tailored to the understanding of everyone. I must never assume that everyone understands. I don’t have the figures, but I bet that more than half the population has never heard a vinyl record played, or even seen one. (What’s a vinyl record? Ask your grandparents.)

I was listening to MP3’s at work today and realized I was rocking out to music that was recorded ten years before most of my co-workers were born. Yes, I feel old, but more to the point, I can’t write about Sergeant Pepper’s Lonely Hearts Club Band without explaining who they were. Or talk about Gerald Ford without bringing up Richard Nixon. Time seems to forget impotant connections and events which will be forgotten in future generations.

Before any of you youngsters start feeling superior because your language and references are cutting edge, I have some questions for you: What will happen to the colorful expressions of today? Will anyone understand them in ten years—what about twenty? Chances are, very few people will remember Hannah Montana, or understand why her concerts sold out so fast. If we want our books to survive through the generations, perhaps we should consider our words carefully. Or at least watch out for dated material.

Good luck in your writing—see you next week.
Posted by Keith N Fisher at 4:37 AM

Wow, Keith, that looks like hard work. You are multi-talented and amazing!

Great reminder about keeping our audience in mind and explaining things they might not know.

First off, wow on all that hard work!

Second, I get your point exactly. But it concerns me.

I'm afraid we're hitting a time when history isn't as important as it used to be. I'm afraid people aren't being educated as well as they should be. We used to have vinyl records -- my mother is a music lover and saw to it that we understood and appreciated music from classical to Big Band to ballads. I know about "Sgt. Pepper," Doris Day, bucket seats, bench seats, Black Jack gum, poodle skirts, model Ts, flappers, and much, much more that all came before my time because I was introduced to history. I don't see this kind of emphasis any more, and that saddens me. So many incredible things came from yesteryear and I don't want them to be completely lost in the hustle and bustle of iPods and Brad Pitt. (Give me Cary Grant over Brad Pitt any day of the week.)

Keith,
Nice blog. And it was great that you included the dutch oven photos. Wow, what a lot of work for you!

Oh, and I totally agree with Tristi. We all grew up knowing, understanding, and even loving some of the things our parents loved. Sadly, it seems that nowadays, young people don't feel connected to the past.

One other thing. Like Tristi, I'll take Cary Grant any day!:)

Great points. That's what I think is so neat about some of the books I've read which were written 50 years ago--they were written so well, they still flow in today's language.

Thanks for the comments. I think I'll go fishin.