My First Week in Paradise 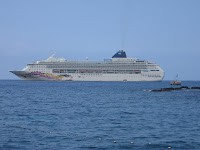 This week I promised to tell you about my trip to Hawaii. We began our cruise on Kauai – the place that everyone says is “The Garden Isle”. It is definitely a tropical paradise if that means breathtaking mountains and valleys, cascading waterfalls, forests, and beaches. We spent a day and a half enjoying the beautiful landscape. The first day we took a tour to Waimea Canyon, “The Grand Canyon of the Pacific”. In the evening, we rode a train around a 100-acre plantation, and attended a luau. The next morning we went down the Wailua River to Fern Grotto (a scenic lava cave) on a riverboat. Just thinking about it makes me wish I were there right now. 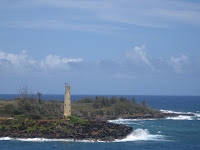 Next, our cruise ship sailed to the Big Island. While docked in Hilo we went to see the Rainbow Falls located near the rain forests in Wailuku River State Park. Next, our tour bus took us to visit Hawaii Volcanoes National Park at Halema’ uma’u Fire Pit and Kilaee Iki Crater. We saw the Thurston Lava Tube, and billowing steam vents near Jagger Museum.

Late in the evening, we stood on deck and watched the lava flow as our ship sailed past the volcano on the way to Kona. The next morning a tender took us to shore where we caught a tour bus to take us through the historic town. We stopped at the St. Benedict’s Catholic Church called “The Painted Church”.

Our next stop was at Pu’uhonua O Honaunau National Historical Park, home to the sacred Hale O Keawe Heiau, a sacred Hawaiian temple. We spent time wandering among the ruins. There was a wall 10-foot high and 17-foot thick built about 1550. I could tell they had fit the stones carefully together. Near the wall were wooden images. Legend says that Hale o Keawe, is watching over this temple. After the bus left us at the dock, we took a taxi to see and take pictures of the beautiful LDS Temple. 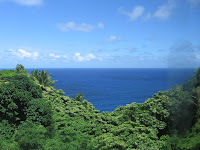 Maui
The final island on the cruise was Maui, “The Valley Isle”. There were lots of mountain slopes and peaks, volcanoes, lava cliffs, lush green valleys, tumbling waterfalls, forest and jungles. We were brave and took the Road to Hana tour. Our first stop was at Waianapana State Park where there were blowholes and a gorgeous black sand beach. I had never seen anything like it before. There is no way I could count all the waterfalls and beaches we saw that day. I’m sure there were more than one hundred curves and over fifty one-way bridges as we traveled the winding road. We had lunch at the Hana Ranch Restaurant. 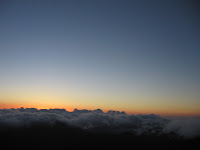 Sunrise
I can honestly say I never remember being as cold as I was the following morning when we went to see the sunrise at the Haleakala Crater. I huddled behind a building and would run out to the rail every five minutes to snap a picture of the sunrays as they began to peek over the crater, and above the clouds. When the time came for the sun to make its appearance, my camera failed to work. I wanted a picture so I would always remember the beauty of that morning. Instead, I’ll always remember how cold it was, and that I was dressed and on shore to take a tour by 3:15 am. Disappointed I returned to the bus, where the driver told me to take the batteries from my camera and hold them in my hands for a short while. By the time he had driven the bus to the summit, my camera was again working and I used those same batteries for another two days.

I hated to see the cruise end because I enjoyed the peaceful and beautiful surroundings. Escaping the real world is something we all need to do at times, and I find my mind wandering back to the scenes I can still see in my mind.
Posted by C. LaRene Hall at 7:59 PM