"Room for Two" Book Review and an Afternoon With Abel Keogh 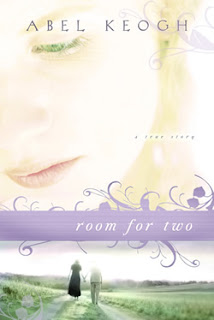 “Sweetie, I’m home.” I tried to put as much kindness into my voice as possible. I didn’t want to have another argument—at least not right away.

A gunshot echoed from our bedroom, followed by the sound of a bullet casing skipping along a wall.

When a life is destroyed, when guilt says you played a role in its destruction, how do you face the days ahead?

Twenty-six-year-old Abel Keogh chooses to ignore the promptings he receives concerning his wife’s mental illness, and now he feels he is to blame for her choices. If only he had listened…


I have to admit, my faith in the LDS publishing industry is shaky. I’ve seen so many really well written books being rejected, and lots of merely so-so books being published, that it’s hard to feel truly excited about picking one up and taking it home. And to be honest, more often than not, I’m more inclined to turn to the national market for my pleasure reading. Sad but true.

I picked up a copy of “Room for Two” at a writer’s conference where Author Abel Keogh spoke. I had the opportunity to read the first paragraph, and was so hooked, that I had to read the rest. Just so you know, it was the only book I bought that day, and I waited in line for half an hour just to pay for it. Then I went right home and read it cover to cover. People, I was seriously impressed.

First of all, that Abel had the courage to share this experience with the world was amazing to me. Second, his book teaches a lesson but is in no way, shape, or form preachy. He owns responsibility for certain parts of a circumstance he didn’t choose, and ultimately, learns how to move forward after this devastating, life-altering thing. I can’t help but admire the guy.

We all have turning points in our lives. We don’t usually know they’re turning points until after the fact, but we all have them. We can’t always control what happens to us, or other people’s actions or choices. What we can control is how we react to our circumstances.

“Room for Two” is the story of a year out of Abel’s life. While this book is sad—I mean make sure you have a box of tissues, you’ll need the whole thing—it is incredibly well written, and shows emotional growth in Abel throughout the story. I read it in a few hours, hardly able to put it down—even to go to the bathroom.


Abel and I are on location in international waters. The sound of tropical music mixes with the smell of salt and brine, the sun shines brightly, and a light breeze teases our hair as we cruise along on one of the world's largest cruise ships.
NG: Hi Abel. Thanks for taking the time out of your vacation to visit with me for a while. I see that you've brought your beautiful wife, Julianna, with you on this trip. Did you bring your children as well, or is this a sort of second honeymoon?
AK: Second honeymoon. We love our kids but because they’re still so young we don’t get much time alone. This is a much needed break.
NG: I understand that both you and Julianna are runners. They have a track on one of the upper decks. Do you always run, even when you're on vacation?
AK: We try our best to run when we’re on the road for business or pleasure. Usually that means finding a hotel with a good exercise room or finding local places to run. We both find that it makes vacations and business trips enjoyable if we can get at least 30 minutes of running or other exercise in every day while traveling.
NG: In your book—well, in your life I guess—you used running as a healthy way to overcome strong emotions such as confusion, anger, and heartache. I got the impression it is also a source of joy for you, as well as your wife. For those of us who aren't marathon runners, what kind of alternative activities would you suggest?
AK: Do something you enjoy. If you don’t like the exercise, you’re not going to stay with it. If running isn’t for you, try bike riding, swimming, weight lifting, basketball, or something else that you’d enjoying doing daily or at least several times a week.
NG: Is it harder to run on the deck of a ship as opposed to the solid ground at high elevations, or is it easier because the air is thicker at sea level?
AK: Lower elevations are better to run because there’s more oxygen in the air! Since most of my runs are approximately 5,000 feet above sea level, I always enjoy running at sea level.
NG: You seem like such a positive person. Even when your world was falling apart, you reached out to help other people in similar situations. That took a lot of guts. How do you feel about support groups?

AK: I’ve personally never attended a support group though I might have tried one if there had been one specifically for young widowers. That being said, I have mixed feelings about them. Knowing that you aren’t alone and that other people are going through a similar experience can be a tremendous help. However, I know several people for whom in-person and online support groups have become a crutch instead of a temporary method of support. They can’t give up the support group. As a result, they’re unable to let go of the dead and move on with their lives. I don’t think that’s healthy.

NG: Not that your story is forgettable in any way, but personally, I don't have the most stellar memory. When you were writing your book, did you find it hard to remember all the little details of what had happened? Or did you have journal entries to back up your memories?
AK: I wrote the first draft of Room for Two from memory. However, I kept a detailed journal during that time and referred to it on revisions to make sure what I wrote was accurate. I was glad I kept the journal because there were some details I’d forgotten.
NG: Do you consider blogging better than private journaling?
AK: I don’t think blogging is better than keeping a journal and vice versa. It’s a different medium and has different uses and audiences. I keep a private journal as well as a public blog. Sometimes the content of my private journal spill over into by blog. On the rare occasion that happens, I usually edit it before posting it.
My journal is more for my family after I’m dead. It’s very personal. There are many things I write about in the journal that I’d never share with the public. Despite having my own website and writing a memoir about a year of my life, I still believe in keeping some things private. A lot of bloggers would be smart to do the same.
NG: Obviously, a situation like yours was difficult to get past. Did you find yourself reliving it as you wrote? If so, how did you handle all those emotions a second time?
AK: I relived everything when I wrote the first draft. Experiencing all those emotions again turned out to be somewhat helpful as it aided in the writing process.
It’s been long enough now that I can read most of the book without becoming emotional. The exception to that is chapter three. I still tear up when I read it. It’s the only chapter I refuse to read in public.
NG: I understand that you're working on a new book, this one fiction. Can you tell us a little bit about it?
AK: I finished the first draft last week. The working title is “Angel of Light.” I’m not going to detail the plot too much right now until the second draft is done. I’m hoping to have publishable manuscript by summer’s end.
The one thing I’ve learned is that fiction is much more difficult for me to write. Writing this book has been quite a challenge. However, I think my writing will be better because of it.
NG: After you finish your blog tour, do you have any upcoming promotions or book signings in the near future?
AK: I don’t have anything scheduled at this time though I’m currently working on a few appearances. However, I’m always open to speaking at churches, book clubs, of other organizations. Anyone who wants to schedule something or contact me about a possible book signing or speaking engagement can do so through my website http://abelkeogh.com/.
NG: Abel, thanks so much for sitting down to chat with me when you could be doing the Macarena by the pool or participating in the "Man With the Best Calves" contest. It looks like Julianna is waving you over to the ice cream stand. What's your favorite flavor?
AK: Vanilla bean.
NG: Ooh, that sounds delicious. Maybe I'll get one of those myself. Right after I stretch out on one of these lounge chairs and have a nap. Enjoy the rest of your cruise. Oh, and when you're out surfing, don't forget to look for the perfect wave and aim for shore. It's a momentum thing.

You took a virtual cruise and didn't invite me??

Nichole,
You took a virtual cruise and didn't invite me either? For shame! :)

Okay, I loved the virtual cruise idea and enjoyed the interview. Thanks for sharing it.

Oh my, did you two not get the invitation? I'm so sorry! Shall we plan another one soon? I could really use one right now.

Thanks for stopping by.

Great review, Nichole. I can't wait to read the book.

It was an excellent book, Kim. I highly recommend it.

Tanks for taking the time to interview me. My wife and I had a great time on the cruise. :-)