With it being the day before Thanksgiving, there is no other topic on my mind to write about. From the time that I was a young girl, my parents taught me to appreciate the things I had. Believe me, when I say we didn’t have much. I was born three and one-half months after the beginning of World War II, and I was almost six went it ended. I’ve always been glad that I was too young to remember any of the horrors of what the people were suffering or the bombing of Pearl Harbor.

Year after year, I always celebrated Thanksgiving with my family, and year after year, I was thankful for my family, home, church, school, clothing, and food. It wasn’t until I visited Plymouth, Massachusetts in 2002 that I fully understood how fortunate I truly am.

I’ve read many stories about the Pilgrims, but seeing with my own eyes the replica of the Mayflower and climbing aboard brought it into perspective for me. There is no way I would have wanted to sail with 102 other people in that small ship in a world of rolling waves for more than two months. I’m sure many of them were seasick, and they didn’t even have a toilet you could flush. The day I was there, only a few dozen people were aboard and to me it seemed crowded. 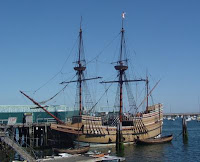 In the Pilgrim Village, it really opened my eyes to see how they lived 375 years ago. I could hardly believe how small their homes were. There were people portraying the pilgrims, dressed in authentic clothing, and actually cooking over the hearth with the same type of pots and tools they used. Many were working outside preparing the ground to plant. If you asked questions, it had to be about things in the 17th century.

Since the day my mother and I visited Plymouth, I’ve appreciate my pilgrim ancestors much more. I’m grateful that they sacrificed all they had to come to this new land, where we can worship as we please. I may not have been as brave as they were, but I can retell their stories and write about the things they endured.
Posted by C. LaRene Hall at 12:21 AM

Connie, sounds like a wonderful trip. I love to read the stories of all the places you've visited. Beautiful pictures.

Going all those places sure gives you a lot of insight. thanks for sharing