In the year 2000, I took a trip with my mother, and my sister, Lillian, to one of my favorite places, Hannibal, Missouri where Mark Twain found his inspiration for the Adventures of Tom Sawyer. I loved this place so much that I had to show it to my husband, so in 2004 we took my mother, and another sister, Dorthea and visited the inspirational town.

Between these two trips, I’m sure I’ve seen every nook and cranny in that town. During the first trip, we rode the trolley on a sightseeing tour, and of course, they told the history of Hannibal. We saw the sights as they drove past the Mark Twain Cave, Sawyer’s Creek, Treasure Hollow, and The Rockcliffe Mansion. Then we drove through a beautiful park and saw the Mississippi River from high upon the cliffs. Next, on the list was a tour of Mark Twain’s childhood home on Hill Street, J.M. Clemens Law Office, and Grant’s Drug Store. To complete the day, we went to the New Mark Twain Museum and saw many of the original Norman Rockwell paintings. We viewed the large river from a replica of a pilothouse, and we each took a turn tugging on the steamboat whistle.

That evening we climbed aboard The Mark Twain, a triple deck boat, and enjoyed a two-hour riverboat dinner cruise. We saw sights such as Jackson’s Island, and Lover’s Leap as we cruised along the great Mississippi River. On board, a look alike Tom Sawyer and Becky Thatcher mingled with the passengers.

On my second trip, we visited some of the places I had been before, including the riverboat. This time we went during the day so we could see everything. I wanted to do something I hadn’t done before so we explored the Mark Twain Cave. In the evening, we attended a Mark Twain one-man show, and listened to him telling us about his many adventures. 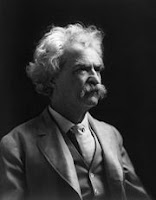 I wanted to pick a quote from him, but because there are so many I like, I decided to pick those about books –
Classic: A book which people praise but don’t read.
If books are not good company, where will I find it?
A man who does not read good books has no advantage over the man who can’t read them. Good friends, good books, and a sleepy conscience: this is the ideal life.

Walking the same streets Mark Twain did, has inspired me. Maybe I might become like him a little, and you could do the same.
Posted by C. LaRene Hall at 12:01 AM

good blog. I can't wait to see where we are going next week on this authros city tour. Mark Twain is one of my favorites. I enjoyed Hanibal too when we went to Nauvoo, we stopped there over night