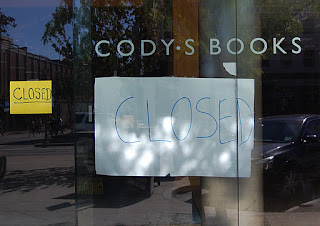 I watched a documentary on Public Television the other day. It was called, Paperback Dreams and it lamented the demise of two San Francisco Bay area book stores. Cody’s Books, in Berkely, California, and Kepler’s across the bay in Menlo Park.

The narrator talked about their beginnings and how they became Mecca for the free thinkers and counter-culture radicals of the sixties. Cody’s even served as a medical first-aid station in nineteen-sixty eight during a Telegraph Avenue anti war protest. The police & National Guard used tear gas and clubs to disperse the crowd. So, a group of former army medics who’d been in Vietnam, offered to help those who were injured.

Many famous people, writers and musicians cut their proverbial teeth in those stores. Joan Baez talked about the time she spent in Kepler’s and what she learned. Even the Grateful Dead, hung out there. Roy Kepler, the founder, used to complain that they always played the same song, and stole the ashtrays. Over the years, there have been many writers who read their work at Cody’s and Keplers and left a signed photograph for the wall. Those places were filled with literary tradition.

The show explored the different ways those two stores have struggled to survive. The economy will always be a problem for book sales, but the real threat started when reading fell victim to visual media. Book sales dropped, but the trade paperback, with the cheaper price, saved the business and gave those two stores their start. Then, came the threat from big box stores, like Walmart, Costco, and Target. They are still cutting into the market, but online, discount booksellers have devastated the industry. The latest attacks on independent bookstores have come from e-books and print on demand and it’s killing bookstores.

As writers, we selfishly plot and scheme. We look to our bottom line to find the best way to get our work published. We embrace the brave new world in our attempt to market our careers and sell books. After all, that is the point, right? Technology is the wave of the future, isn’t it? I wonder how many of us consider what the brave new world is doing to the independent bookstore.

We search for places to launch our books and moan the loss of independents, but forget to patronize those stores during the rest of the year. We buy each other’s books online and as e-books. Who can afford to do otherwise?

During the closing of one of the stores in the documentary, one of the customers claimed she used to come into the store three times a week. In a private response, the owner of the store wondered, if that were true, where were the sales? It’s the bottom line that closed the store.

With the loss of independent booksellers, our world is changing.

I’ve lamented the coming of E-books and print on demand before. I certainly don’t want to harp on something that is inevitable. I just wish we could hold-on to the better parts of our society.

Good luck with your writing—see you next week.
Posted by Keith N Fisher at 12:08 AM

Thinking of Fahrenheit 451; then lament the impact of the so called political correctness & going green have, on our cultural legacy.

I am not a fan of the ebook. Printed words on a physical page will always win out with me, and if they ever disappear completely it is just time for the world to end. E-anything isn't long term. Once you've read it, you have to delete it to make way for the next book. And what happens when your system crashes, which computer-stuff is famous for doing?

You'll never have a book just 'disappear' off your bookshelf (unless you have theives in your midst). And a real book doesn't become obsolete just because a new reader comes along!

With the loss of independent book stores, there's still many ways to get your material out that wasn't available 10-20 years ago.

Thanks for the comments guys.

Yes, Norma, there are many ways to get your work out there, but I miss drive in movies, car hops, and independent bookstores.

every time a zebra gets into a fist fight with a doctor about his stripes, someone gets his ass kicked. and a book store closes. stop the fighting. start the future. a zebra free future.