Re-Posting From the Archive 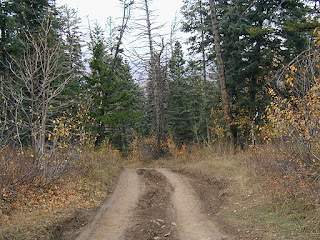 I’m going camping and I won’t be here on Saturday. Also, things are hectic right now, so I decided to re-post an article from 2006. I’m not sure if this will appear on time, but if not I’ll be late. I did a little editing because I’m a better writer now. I hope you like it. I’ll see you when I come down from the mountain.

I couldn’t bring my computer. Well, I guess I could’ve but I’m one of those who didn’t know you should remove the battery from a laptop while on house current so it only lasts about 50 minutes. Because of my daily writing habit I wondered if I would go crazy without my electronic crutch.

In an attempt at appeasement, I brought a wire bound notebook. I figured I could at least, make notes of the ideas I might have. I had a priesthood lesson to plan anyway.

My brother had a different kind of hunting permit than I did, but I didn’t want him to go alone, so I went camping. As it turned out, my dad went too, but he stayed in his trailer with my brother. So, I had a lot of alone time in mine. During the day, I got to shoot the bull with my dad. We solved the problems of the world, and my brother went hunting.

Have you ever tried to concentrate on a plot while chatting with someone? I put down my notebook and talked. I didn’t get my writing done.

After we ate the Dutch oven food I cooked, and we said good night I went into the trailer and opened my notebook. Nothing happened. I tried to make notes for my lesson but I couldn’t keep my mind on it.

I realized if I had a generator, I could’ve brought my computer. At least I could Edit, or watch a DVD. What do you do when you’re camped at 9,000 feet during your writing time and nothing comes to mind? Did I mention I was alone in a camp trailer? No distractions, what a great set up. I was having the weekend that most writers can only dream about, but my mind wasn’t co-operating. What would you do? I gave up.

I finally decided to go to bed, thinking I would at least get some sleep. Well, that was the plan, anyway. I began to obsess over a dry throat and dust in the furnace. I didn't want to wake up with a cold. Perhaps a little hot chocolate, I thought.

When my hot drink was ready, I sat down and thumbed through previous notes made in my notebook. It got me thinking about the characters in a different book than the one I was working on. Suddenly, and without forethought, I was writing again. I still missed my computer screen, but the notebook was working fine.

Three cups of hot chocolate and four hours later, I decided that I’d better go to bed. I was happy when my head hit the pillow. I forgot about the dust in the furnace while I dreamed about plot lines.

I spent the rest of the weekend writing the story I never intended to work on. I learned to be flexible with my writing time. I also learned that even though it sounds crazy, characters are like children. If you pay attention to one, the other will get jealous and try to take center stage. If I listen, perhaps my writing will turn out better.

I’d forgotten the joy of quietly putting ink on paper. It was nice to reacquaint myself. Although, reading what I wrote, is another matter.


As I said, this blog was written in October of 2006. That was three laptop batteries ago. I now have a cigarette lighter cord for my computer, and I take a notebook.

There are several projects percolating in my brain in case of writer’s block. I’m also writing a cookbook, so my camp kitchen is packed and ready. I’ll see you when I get back.