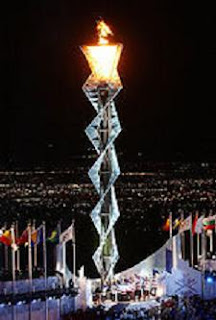 In case you weren't around the last time the Olympics came around, I am a certified Olympics fan.  I was lucky enough to participate in the 2002 Olympics for the opening and closing ceremonies.  (I hesitate to post a photo, since there is now the chance I might get sued for it...but I think this was one that I've had since then and got from the Deseret News...so hopefully all credit goes to them!)

I bring up the Olympics for two reasons:  First, the opening ceremonies for the 2012 games in London are tonight, and second, the media.  There is always a media blitz for the Olympics, the participants, the politics, the culture, etc.  By the end of the whole thing everyone is usually ready to grab any reporter they see and throttle them.  There is so much that is thrust into our faces, that it becomes really easy to go on overload.

What really gets to me is how they have to comment on everything.  We can't just enjoy the sport, we have to know how long it takes to do a move, how many years it took to perfect and how many other people came short or did it better.  It really irritates me during the closing ceremonies when they interrupt the ceremony, or production part with interviews of the Olympians that won medals.  Hello?  We've already heard everything about them from the time they were small and first jumped into the swimming pool!

Understandably, these people are just doing their jobs.  There are many who want to know all there is possibly to know about every little thing.  So, there is money to be made in providing that.  I heard a radio program the other day that discussed journalists.  The main point was how journalists are supposed to be neutral on every subject they cover.  They aren't supposed to have political leanings.  They are supposed to present the facts and let the public make it's choice.  Well, how much do you think that happens?  Writing is all about how you twist the words, isn't it?  We either make the subject good or bad by how it's presented.  I remember a quote from CS Lewis's book,  The Screwtape letters, where he points out how Satan twists evil to make it seem amazing and good.

(this was a free photo)

I bring this up because there have been many times over the years that I've been outraged over how the Olympics were handled or reviewed.  How the judges were very political, how participants were left off the podium because of something outside of the sport.  It's a sad world we live in, and while I'll probably be angry with the judging in the gymnastics again, I'll still watch it and cheer for the young people who have given their all to be there and compete.  And, should I write about the Olympics next week, I'll try to portray a non-bias view of the proceedings so that you, dear reader, can draw your own conclusions.