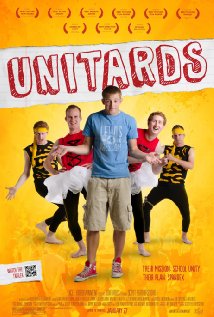 Just in time for the middle of summer blahhhs...a review!

When my family watched this movie the other night, I knew it had to be posted.  There is so much material that can be discussed on writing scripts and stories and characters!. If you haven't seen Unitards yet, you really should rent it when you're in the mood for some lighthearted laughs.  And may I say that it is NOTHING like Napoleon Dinamite?  Would that influence you?

Anyway - I've thought about renting it for a while, but my daughter brought it home the other day and said we needed to watch it as a family.  Okay, works for me.  We watched it and it was hilarious!  What really made it for me was how easily the three main characters worked together.  That alone made the movie fun to watch.

I first heard about Unitards when it was going through the film festival circuit, and KSL ran a story about it.  Apparently it's based on events from the main characters real life actor, Sam Featherstone and his senior year in high school.  What I think is great, is the support he had from his parents -- especially his father, Scott Featherstone, who directed, and wrote the movie.  He had their support, and they encouraged him in his endeavor.  How many parents do that with something so odd-ball?  Not many.  I think that's amazing.


I also think the dad is pretty good at script writing.  This is a simple movie, with a simple plot and little by way of sets.  But it's one of those movies that you'll want to watch when you're feeling blue, want to dance, or need something you don't have to do a lot of thinking with.  There are several books like that that I read over and over again, simply for the relaxation and enjoyment.

I hope his dad comes up with something else when Sam get's back off his mission.  It would be fun to see a Unitards 2, the Collage Years, or something.  I mean, look how many High School Musicals they did!

I just watched the Unitards trailer and it was hilarious! Definitely going to grab a copy now :)

I've heard of it but I haven't seen it. I'll have to check it out now.