Grammar Quiz time. And if you're Annette Lyon, you don't get to play, you already have a 100%. 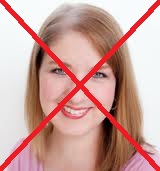 (Sorry Annette, this isn't for you.)


Which of the following is correct:

Did you automatically say the first one? Yep, you're more than likely in the majority with many others that got it wrong. Did you then wish to change your answer to the third one since there's a dangling participle? Yep, you're probably with another chunk of people who got it wrong. The answer is the fourth one.

Do you know how I learned the grammar rules so well? I took four years of French class. Not only that, I did pretty well in my French class, especially when it came to grammar.

Side note here that ties in: I love math. Math has order and formulas. In order for a formula to work, you HAVE to follow the order of operations, or you'll get the wrong answer. One day at my previous job, two very intelligent IT personnel said to me "Hey, you know (Microsoft) Excel, can you tell us why this isn't giving us (the wrong number)?" So I opened the file and read the formula. Within five seconds I said, "You don't see what's wrong here?" They looked at me like I was speaking Tagalog. "Excel follows the order of operations. You need a parentheses around (these parts of the formula) or it won't work the way you want it." They looked at each other, looked at me like I just told them that Elvis lives on Mars, and then looked at each other. So I fixed the formula and proved to them that I knew Excel (and Math) better than them. Proud moment.

What's this got to do with grammar? Guess what, English, the most toxin-filled language out there, does have grammar rules. And these rules, you know, the ones to which only future English teachers pay attention, actually exist.

Today's rule to point out is "who" versus "whom". Now, in the earlier quiz of this post there were TWO grammar problems. The first is the dangling participle at the end of the first two options, which is grammatically wrong.

The other is the "who" vs "whom" conundrum. Here's a little illustration to show you: 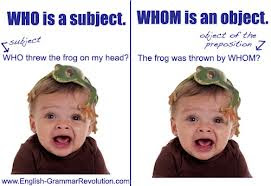 Poor kid. Thank goodness that's not my kid. How can you tell? Mine would have a panic attack much more severe than this, believe me.

Anyway, see the info on the right? There's a key phrase there: "object of the preposition". If there's a "to" or "by" or anything like those words in the sentence, it is NOT "who". So saying "Who do I give this to?" is nails on a chalkboard. (Believe me, I had an aneurysm just writing that.) And if Microsoft Word tells you this sentence is "wrong" and you say "No it's not", you're still wrong. It's always "To whom do I give this?"

Alien abductions are involuntary, but probings are scheduled.
Posted by T.J. at 6:00 AM