My Money for a Good Play 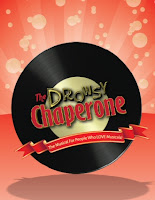 My son is taking an intro to drama class that requires he attend two plays per term.  While that doesn't seem like a big deal, it's a stretch when money is tight and there's a wedding going on.  We didn't even have time to look into it until after the wedding, and then I discovered that the term ends next week.  No pressure!

So this past Monday I took him to a little neighborhood theater that we'd been to once before that was doing something called "The Drowsy Chaperone."  I thought it was interesting because I remember the high school doing it last year and we didn't go see it.  I figure if it was something the high school could do, then perhaps it wouldn't be too crazy.

We really enjoyed it!  It comes kind of from a different perspective, as it's being told by a person who is sitting in his little apartment listening to a record.  It's kind of a spoof off musicals, and it's very entertaining. It was really interesting to me as a writer because I've flirted with the idea of writing a screenplay.

Play writing is so different from a book.  With a book you need to put everything in the pages; emotion, scene, atmosphere.  In a play, you have to write what people are doing, where they're going, what they need to do, and then each person and their lines.  The whole set up is different.  I'm not sure that switching to plays would be my thing, but I know there are several out there that do well at it.

One of our favorite movies is one called "Noises Off."  This is a movie about a group of actors and the director doing a play from opening night in some small town to ending up on Broadway and the relationships and trials in between.  It's strange to watch sometimes because it has Christopher Reed and John Ritter, both of whom are greatly missed.

But anyway - if you have a desire to write a play, that is something you can do during National Novel Writing Month, though they actually hold a different one toward the spring for screen/play writing, which might be more to your liking.  I'm just suggesting that if you are thinking of giving it a trial run, November might be a good time.

It's always a good time for a play.

I've often toyed with the idea of having a go at a screenplay but it's never attracted me enough to actually make me sit down and write one! I think I actually like the stuff about inner voices, charcter's thoughts and such like that you get in a book but not in a play.