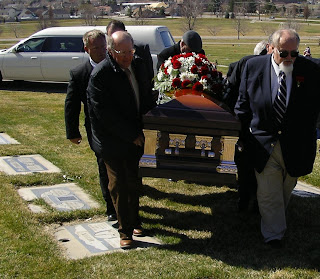 I also learned there is a heavy end on a casket. I didn’t want to be a pallbearer, but who else? That’s another issue, but I actually chuckled as I limped over to wait for the casket. Without getting specific, I’m having trouble walking on level floors but it’s really hard on uneven surfaces. We stumbled over headstones and carried that casket up a hill. Why they parked the hearse downhill from the grave, I’ll never know.

As you might be able to tell in the picture, I almost dropped the casket. Then I fell backward from the platform. My wife caught me, but it took awhile to recover from the trek.

On the way back, I asked the funeral director if there was a heavy end to a casket and he confirmed there is, and I had it. It doesn’t matter though, there were only two young men. The rest of us were old guys. The task of being a pallbearer should be left to young Grandsons.

After the funeral my writers mind took over and I plotted a scene where dropping the casket actually happens. I know, it’s been done before, but my scene was serious drama.

You look nice - sorry about all the rest.