They never go Away 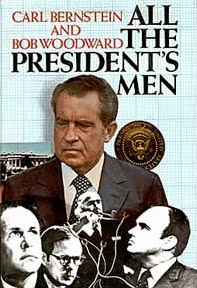 Okay, I know, the last quote wasn’t exactly on everybody’s list of favorite cultural clichés, but I wanted to include it, because it reminds me of the old days. It was from a phone conversation Bob Woodward had during his investigation of the Watergate burglaries. He hoped to prove President Nixon was involved in the cover-up.

The book is called All the President’s Men. Written by Bob Woodward and Carl Bernstein. While working for the Washington Post, those two invented what we call investigative journalism. Since I included the quote, I’ve been contemplating their role in our society.

Richard Nixon said it best when he said, "People have got to know whether or not their presidents a crook."

That’s true, but there are some things we might be better off not knowing. I don’t know. Maybe we’ve taken the investigative journalism thing too far. But that’s a subject for a different blog. We try to stay out of politics here.

So, let’s move on, to another quote. You should remember Parting is such sweet sorrow.

I can’t seem to do that. I don’t necessarily love them, and I’ve killed some, but my characters live in my mind like real people do. They are my friends and I know more about them then my real life friends.

I guess there are other writers who feel that way, or we wouldn’t have the Stephanie Plum series written by Janet Evanovich. There’s Alex Cross written by James Patterson. Jimmy Fincher, Samantha Shade, and Shandra Covington. Written by James Dashner, Kerry Blair, and Jeffery Savage.

Now, J K Rowling is writing another Harry Potter book. My friend, Heather Justesen has written several books about the family and friends she created for one of her books. It’s not a series, just different stories about those characters. I wrote several different characters with their own stories into one book, called The Hillside. It occurred to me that I could write several books based on those stories. I would keep the characters alive and I wouldn’t have to say goodbye.

Alas, parting is such sweet sorrow, but not in this case. I think it’s interesting that given any situation, I can tell you how each one of my characters would react. Each reaction would be different and individual. I hope that means I’m becoming a better writer.

Have fun making friends and enemies with your characters. I hope you don’t have to kill any of them.