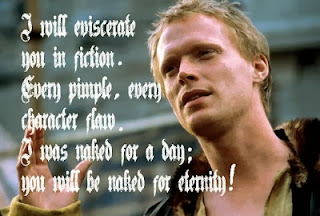 One of the biggest frustration in writing is having the perfect character - I mean the PERFECT character with all the best character flaws, the best or worst motivations that fit the plot to a T, and those perfect imperfections that will win you the Pulitzer....

..and not being able to use them because you know that person would recognize themselves in your work. Which mightn't be so bad if it was someone you didn't like. That's just the chance you take when you cross a writer!

Until they sue you. Or worse yet, disown you.

In one work I have written, which will probably never be published for fear of disownment, the disclaimer in the front reads:

"Names have been changed to protect the author - and because my mother said I had to!"

So what do you do? I have no answer, because I still haven't decided.  But I think it is probably safest for all concerned if you learn to slice.

The same could be said for our characters. If there's something about your inspiration that would be perfect, use that slice of them. Don't use whole cloth, use a strip of this one and a slice of that one, and quilt together that character.

I think it's better for the writer that way, too. It's not terribly healthy, for the writer or their book, to be too in love with your characters that nothing can change, or improve. It's too hard to kill your darlings. So give them something even you don't like, then it won't be so hard when you have to chop them up, rearrange bits, and maybe even get rid of a slice or two.

That sounds very ax murder-ish, but you know what I mean, right?