I didn't think I could do it. It was hard enough to write my personal history the first time, I really didn't think I'd survive a second go-round.

There's a certain chunk of time in my past that holds a really good story. It is important to me, and to my family. Everyone who hears one of us talk about it inevitably tells us we should write it into a book.

Hemingway once said all you have to do to write is sit down at your typewriter and open a vein. He wasn't kidding. It was almost that painful, more in some ways. My husband had to step back a bit. I told him to, because he's one of those guys that wants to fix or kill everything that makes me sad and I needed room to let that sadness manifest. My sister told me I was going to have a nervous breakdown, and my mother accused me of being on a witch hunt.  It was almost as uncomfortable for my family as it was for me to write this traumatic, dramatic event.

I wanted, no needed, to catch every detail. I didn't want to leave anything out because I felt that anything omitted would be a lie. No one would believe this was a true story if every single iota of detail was in place. They wouldn't understand the depth of it unless they had all the history, all the back story, all the reasons and all the rhymes.

Then I gave it to two separate published authors whose opinion I value highly. And I waited. I waited like a woman in the waiting room of a hospital, waiting for someone they love to come out of life or death surgery.

And then it came back to me. The diagnosis wasn't good. It had fallen far short. Somewhere in those facts and details I had lost the thrust, lost the drama. Both of my critiquers were very positive - it had potential.  It could be really great - if I fictionalized it, turned it into a novel instead of a memoir.

I went through every stage of grief over that verdict.

Denial. What did they know, anyway? Anger - gut wrenching fury. Bargaining - decided the project would have to die, because I was not going to fictionalize it. I'd put it in a drawer and leave it there forever before I'd cheapen it by making it fiction. Depression - all that I had gone through meant nothing. My dream of putting it out there for others to read would never come to fruition.

The Acceptance started with a phone call. I mentioned, in passing, to my family what had been said to me about fictionalizing the story. To my absolute surprise, they jumped all over that idea. It was the best idea ever, in their opinion. I about fell off my chair.

When I picked myself up, something changed. Suddenly, if my family was okay with it, then it was surely no sin to fictionalize the story. It wouldn't be untruth, it would be based on truth. And if that was the case, then it didn't matter if every little detail, every word, every movement was actual - the spirit of the story would remain intact, even if the parts were rearranged.

So this is the crossroads at which I currently stand. 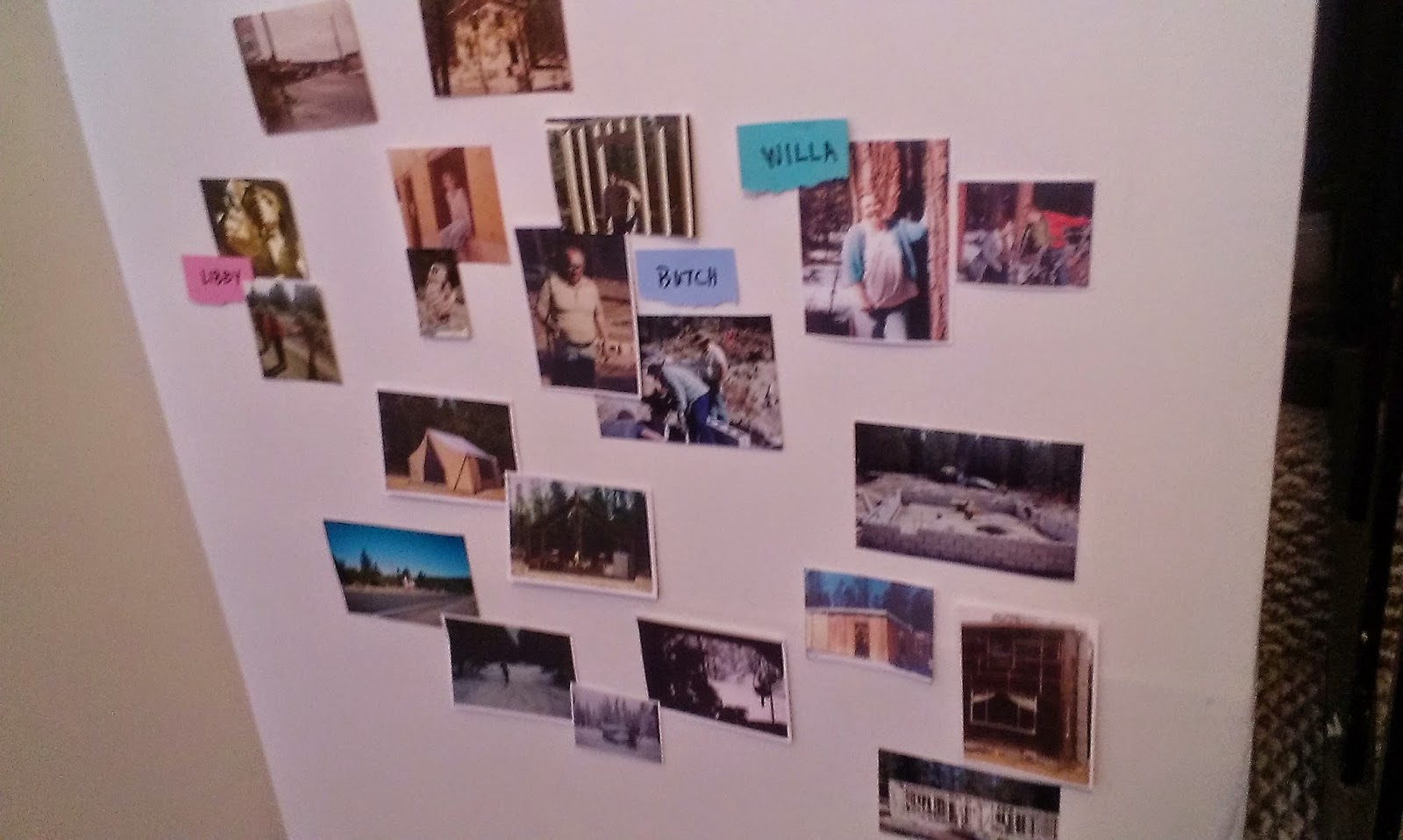 I went through the photo album of pictures I had compiled specifically for the original version, and pulled out a selection of pictures. I pulled out only those that embody my characters, the setting, the general feel of what I want to portray in the novel. Then I could, literally and figuratively, close the book on the past and begin anew. 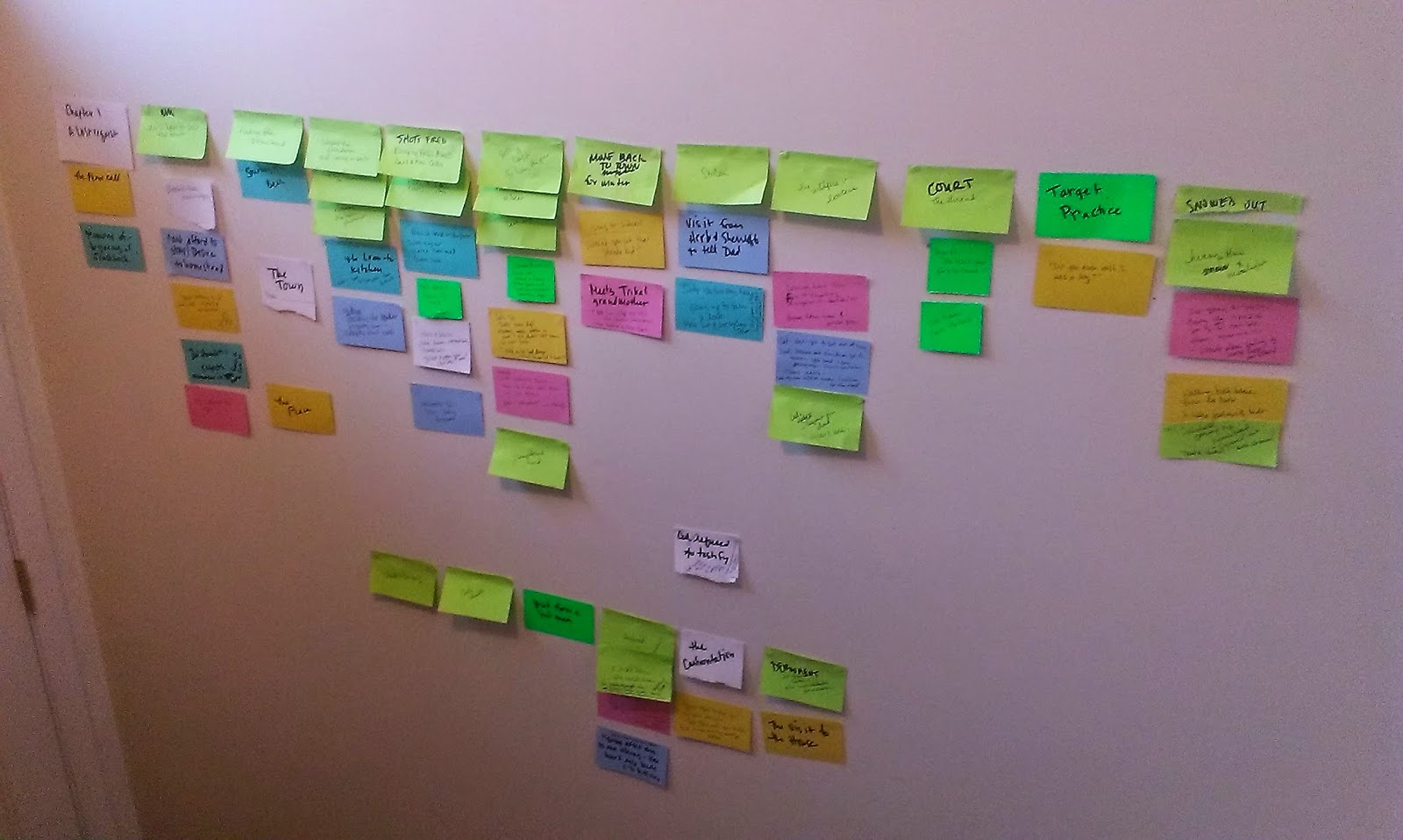 I bought myself colored index cards, one for each viewpoint. Since I was no longer telling the absolute truth, I no longer have only to rely on my own point of view - suddenly I have four POV's to work between, and whole wide worlds of possibility have opened up. The two blues are my parents, pink is my sister, and yellow is me. Green are actual events, the few white cards you see are things that are made up from whole cloth. There aren't very many of those, the vast majority of the story is actually factual.

I no longer have to worry that the main dramatic point was not, chronologically, the climax of the plot. Rearrange a few cards, and the thrust of the drama returns.

I used to worry that fictionalizing would be a burden, a weight I was not strong enough to carry. But I'm finding as I work farther into this, it's actually quite liberating.

Follow Weston's personal writing journey at  westonelliott.blogspot.com
Posted by Weston Elliott at 6:00 AM

This is gonna be good!

Glad you think so! I hope it turns out as good to read as it was terrifying to live through.... LOL