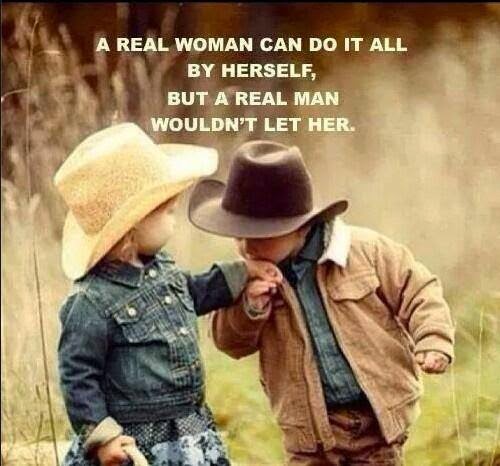 I wasn't intending to post this for Valentines Day, but maybe its a good thing. Happy love day to all of you.

When I write about gentlemen in my novels, I make them real. I know that many women want to read about the hunky testosterone laden guy who sweeps the main character off her feet. He does all the right things and he’s a manly man.

In real life there are no manly men. Well, I guess it’s a matter of definition. I’ve met guys who think life and everyone in it, revolves around them. Why are women attracted to men who treat them badly? Recently, the picture above floated around Facebook. The fact that so many women shared it on their timelines fascinated me. I found it a little offensive, but read on, I’ll explain why.

As you can see, the message is clear. A woman can do anything, but a real man wouldn’t let her. Really? How many women do you know who would let a man take over? How many will actually wait for a man to open her car door, or expect to be helped at all?

I’ve written characters who were “bad boys” and the women in my critique group loved them, but I doubt they would marry them. Have you read Nights in Rodanthe, by Nicholas sparks? The main character was married to a man like that. He was a macho type, and he treated her badly.

At first, she probably loved the way he took charge. Then he cheated on her and the marriage ended. As the story progressed, she fell desperately in love with the doctor who was far from a macho type. He wasn't a manly man, by many definitions.

The point I’m trying to make is that men are men. Relationships with men like her husband often don’t work. As for the perception of a man who won’t let a woman do things for herself, I say:

Chivalry is NOT dead. It is, however, buried in the hearts of all men who were taught to be a gentleman.

In the real world they were shot down with words like:

“I can open my own door thank you.”
“Get you hand off my back, I don’t need to be directed.”
“I’m perfectly capable of finding my own way home.”
“I’m going to have to break our date. You don’t mind do you? I’ve been waiting for another man, and he finally asked me out.”

The days of men taking care of women are over. The concept fell victim to woman’s rights. Because of the schemes of certain lobbyists and right to work laws, there are many more women in the work force. Not necessarily, because they want to be, (although many do). Some don’t, but its impossible to make ends meet, without two incomes per household.

Yes, women are capable, but they always were. Don't hate me, but I think, many women have a secret desire to be dominated. At the same time, the fear of losing their independence makes them reject offers of assistance.

With the popularity of Pride and Prejudice, and other books that support my claim, consider this:

Women in those days had no autonomy. They were entirely dependent upon men to provide for them. It was written into the law.

As many more women rise, or are forced into professional prominence, we might see more of a drop in chivalry. Trust me, however, it’s not because gentlemen have ceased to exist. It’s a cultural thing.

True Gentlemen will always be there watching, waiting for openings to assist. Believe me they don’t offer to dominate, they offer, because of the woman who taught them years ago.

Writing tension, is one of the first lessons taught to beginning writers. The differences between the genders are perhaps the best way to do that. Also, some advice as a parting note: Keep your characters real. There are as many different gender traits as there are people in the world. Men are sometimes frail. Women are sometimes powerful. Learn who your character is and don’t force them to be people they are not.

I sense the frustration you're feeling in this article. I don't know why the whole holding a door open thing became the issue that it is. I'm as likely to open a door for a guy as he is to open it for me. And it's all good.

You said something that made me shudder. "Don't hate me, but I think, many women have a secret desire to be dominated."

What I want is for my man to have my back, as I would have his. Fortunately, I have this.

you are right Donna, in an extreme that is what happens. that was the point. thats why so many women get caught up in that crap

The world today is confused. To me a
'real man' is a gentleman not a
bully, is honest but knows how to
refrain from speaking, love fully,
serves wisely and accepts service
graciously. That describes the
'real woman' as well. If I had
written the caption for the picture
on your post it would have said
something like this "A real woman
can do just about anything.A real
man knows when to step in and
when to stand by."