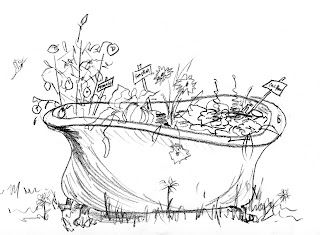 In a moment of introspection, I realized something this morning while I was watering my garden.  Writing is much like creating and maintaining a garden.  Have you ever given that some thought?
When you create a garden, there is the planning phase, the preparations, the planting, the maintenance and weeding and then the harvesting.  All of these aspects are similar to writing.
Usually in writing a story, there is the initial idea.  This generally turns out to be the plot, what the story get's built around.  Then you flesh it out.  This can be either in an outline, storyline, however you work it.  It gets you from the beginning to either the end, or the climax and you have to figure it out.
Then it's the work.  That's the filler...chapter by chapter, line by line, you fill the pages with the story.  The characters, the scene, the dialogue.  That's the planting of the plants and then watering them.
Rewrites would be the weeding.  Going through and making sure the story flows, like watering the plants.  Until finally, you reap rewards in harvesting the items you planted, or seeing someone actually read your work.  And like it.  And want to publish it.
Seeing your book in print is like the best harvest festival ever held.
Just this past Monday a good friend had a book signing event with several other authors at a local bookstore.  It went smashing, from what I understand, and when I was there, there were loads of people, all picking up copies of the books.  It was an awesome garden.
What kind are you planting?
Posted by G. Parker at 1:22 PM

I hate the weeding. And I feel like I've been weeding FOREVER. I'll keep that beautiful harvest in mind though and persevere. Thanks for the lovely illustration.

I'm definitely in the filler part--lines to scenes, secenes to chapter--even turning a little extra fertilizer in.