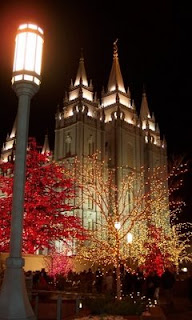 This time of year is full of traditions.  We have traditions that have been handed down for generations, and traditions that are started as new couples with young families.  When two people get married, it's usually a blend of family traditions in their home.  When we got married, my hubby and I had very different views on what happened on Christmas day, how stockings were hung and what was done during the holidays.  We finally agreed to alternate some things, but it turned out that we never put the stockings up till Christmas Eve (sigh) and there is no Christmas music played before Thanksgiving.  I'm sure there's many traditions like that in your home.  There are lots of traditions that are social ones, and religious ones and business.

Some of traditions are worth keeping.  They enrich the lives of those participating as well as give our children something lasting and concrete to hang onto.  Traditions are usually worth explaining at that point.  Like why we have Christmas trees and celebrate Christmas in December instead of April.

There are some traditions though, that need some examining.  And there are a few that have come under the microscope lately, and think change is afoot.  I'm talking about traditional publishing.  Used to be if you wanted to get something published, you went to a representative of that publishing house and presented your work.  They liked it (or not) and then offered you a sum in advance (sometimes) to publish and everyone hoped it would do well and sell enough to make money.  Then the average person started to need an agent, because well, EVERYONE wants to be a writer.  Everyone has a story to tell and thinks what they have to say is worth reading.  That has caused a backlog of work for the publishing companies, and they turned to agents to represent the writers so that they could weed out those who weren't quite as good as they thought.

Then comes the internet and modern media.  Publishing becomes kind of an older model of doing business.  People are introduced to the ebook concept and the whole idea of publishing traditionally has come into question to the point where some publishing houses have started their own lines of ebooks.

Along with that you have the indie publishers...or in the old days, vanity publishing.  This was where and individual is turned down by a traditional publisher, decides to take matters into their own hands, and pay to have their work published and markets them themselves.  Back in the day (as a co-worker of mine likes to say) when someone published a book on their own, it was looked at as not worthy of reading because a publisher hadn't printed it.  They couldn't sell them in traditional book stores, and it was difficult to get a hold of one.  That is still an image that people are fighting because, unfortunately, a lot of books that are published by people on their own don't always have the editing and other checks going on before the work is published and they have lots of errors.  It's hard when you're doing all the work yourself.

I'm privileged to know a couple of individuals who have gone the independent publishing route, and their work is good enough the publisher should have grabbed them -- but didn't.  Their loss.

But my point in this, is that perhaps it's time to rethink the traditions regarding standard publishing.  There is such a whole new world opening out there with the internet and ebooks.  People can download information with the click of a button.  No longer does it take a whole lot of paper and ink and time to produce an article that perhaps will sell, perhaps not.

I'm not advocating that paper books stop being printed.  Personally, I like the feel of a book in my hand, the smell of the ink and the turning of the pages.  I haven't bought into the ebook market yet -- though that's a possibility, I'm sure.  But I do think that people shouldn't have to be as constrained as they were, so dependent on the way a publishing company worked.  It opens up a new opportunity for writers everywhere to really have a chance to get their work out there for people to read.