My Computer Ate My Homework 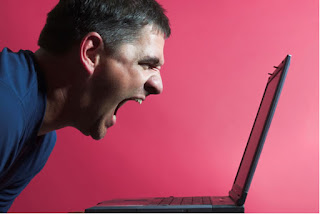 Like an obedient computer operator I saved after every paragraph. Don’t you think I deserved a positive outcome? Read further. During my writing session the other day, I’d found the zone, and I felt golden. That’s when my operating system arbitrarily decided to close my word processor. I’d written a whole scene of great stuff and was in the middle of the next one, when it quit.

Normally, it wouldn’t be a problem. I could just reopen the program and all my saved stuff would be there, but not this time. The writing gremlins or a sadistic operating system had other ideas. I lost the whole thing up to the first paragraph of that session.

Have you noticed I’ve avoided mentioning names? I’m trying to keep from being arrested when I mention my plans for murdering the software engineers. In an effort to clarify, let me tell you about my problem. I have a word processing program developed in 1997. My current operating system, developed recently by the same software company, is not friendly to my older stuff.

I can almost understand them making the system so that old DOS based programs don’t work. After all, it’s hard to make a do all application that takes every situation into account, but wouldn’t you think they should at least honor their own programs?

Okay, I admit I’m holding onto the old tried and true applications and perhaps I should jump into the twenty-first century, but I don’t have that kind of money. Besides, when did we become a disposable society? Are we supposed to change computers and software like toilet paper? Should I have to purchase a new car when I get gas?

So, after I ranted and raved about the loss. I tried to rewrite the wonderful prose I’d written, but it was gone. The ideas were there, but the perfect arrangement of words had slipped from the pages and my mind. It didn’t help to reflect on what the software company had done to me, so I opened a new document and wrote this blog.

Don’t worry, I’ll get over it, but I hope you’ll understand when I threaten to kill the engineers. I won’t really do it, but then again, maybe I’ll get a light sentence. Who would convict me? I'm sure the jury has the same problem.

Good luck with your writing---see you next week.
Posted by Keith N Fisher at 2:13 AM

Losing stuff is the worst!! I lost half a book years ago and still haven't found the courage to try to recreate it.

You need Dropbox. Save your work in the cloud and access it from anywhere. Is automatically backed up, plus you can access the file (with all current saves) on your laptop, desktop, tablet, or mobile device. Plus, it's free.

I email my files to myself, usually whenever I leave my office. Paranoid? Yep. And what happened to you is proof of why I should be.

Yes Donna and Gina. I also have wonderful places where I save files to. but I casn't enail myself after every paragraph. I'd never get anything done. my loss occured while I was writing.