Ever discover that what is on the surface hides something worse underneath?

We're often told to not judge a book by it's cover.  There are many good books that have covers we would pass by if given the choice.  There are many books you pick up thinking it looks very interesting, only to find it's full of filth or awful writing.  It has gotten to the point where you can rarely trust what you see.

This is also true of cars -- something we discovered this past week.  Two weeks ago, our daughter slid off the road in that snow storm on Saturday.  Not only did she slide, apparently she hit the wires and girders and stuff that divide the lanes going north and south on the interstate.  The tires were flat, a light was hanging out and she thought it was going to cost a lot, but it was fixable.  We were just thankful that she wasn't seriously hurt and that she hadn't hit another car.  They towed it to our neighborhood auto repair shop and we figured we'd get an estimate in a week or so.  She'd be out of a car and we'd have to juggle things, and well...life goes on.

The auto repair looked at it on Monday, we got a hold of insurance peoples, and after a week of communication, we were told that the car was a total loss. 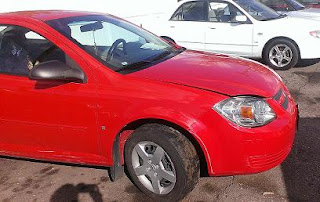 I mean, really.  If you looked at it from the left side, there was nothing wrong with it!  It wasn't till you looked at the right side that you saw any damage, and even then, I wouldn't have thought it was that bad.  It was pretty funny, they had put the spare tire on the front to see if they could move it, I guess.  It looked kind of pathetic when we went to clean it out. Apparently the damage was more than was visible to the uneducated eye.

Such is also the case in covers for a book.  At first glance, you either think, 'yeah, that looks interesting,'  'ugh, that's not something I want to look at', or 'that doesn't look very interesting.'   It's only with the judging refrain going through my head that I even force myself to pick up a book from time to time and glance at the blurb on the back.  This is the reason that authors sweat so much over their covers.  These are an essential item. 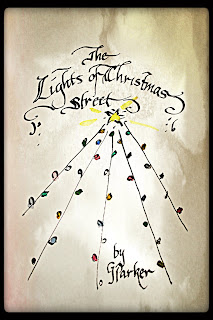 I particularly worry about my covers, as I write romance more than anything.  Most of the romance in the stores (I should point out grocery stores, lol) have the kinds of cover that make you blush and want to cover everyone's eyes.  I want to make sure my covers are not an embarrassment to anyone, and would be nothing I'd be ashamed to hand out.  I love the covers to Josi Kilpacks cooking mystery books.  They are fun and you know from that cover that the insides have food and mayhem.

You want your book to be read -- it's the whole reason you wrote it!

So, give it some thought.  Do your homework, and get that book published!