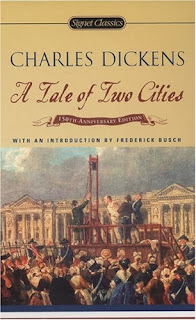 Yes, the quote from last week was from A Tale of Two Cities by Charles Dickens. The idea of the ultimate self-sacrifice has always touched our hearts in literature and reality. The concept of the needs of the many outweighing the needs of the few goes back several generations. It is the premise of the sacrifice made by Aslan the lion in The Chronicles of Narnia. Of course, all the examples point to the real sacrifice made by Jesus.

I’ll provide this week’s quote below, but first, what would you do if you met a famous person in an elevator? What if they moved into your neighborhood? What if that person is a personal hero of yours?

I have very few heroes in my life. They are people who reached a high station in my estimation, through their actions. I often wonder how I would react to meeting those people. I’ve sent letters to some of my heroes, and sometimes regretted saying some of the things I wrote. It’s funny what being in their presence can do to us regular people.

Recently, Comic Con was held in Salt Lake City, and although I couldn’t go, I heard many reports. There was high praise for the experience. In some of those reports, however, I heard about the fees several of the, would be heroes charged for the privilege of having your picture taken with them.

One of my good friends from Dutch oven competition days wrote about that and was criticized for his opinion. He, himself, makes his living in the public eye. He mentioned the fallacy of charging large amounts of money. I believe he said, we, the fans, purchased their work. We watched and made them what they are. Now, rather than pay back, the famous people take more.

Let me say, I agree with my friend. Although he is not a personal hero of mine, I wouldn’t mind meeting William Shatner and even posing for a picture with him. Paying seventy-five dollars for the privilege, however, is bogus. Especially when I would’ve had to purchase tickets for the event.

With that being said, let me point out something. Famous people, and even our heroes, are just people. They deal with some of the same issues we deal with. Many of them have personal lives we shouldn’t emulate. Why do we get flustered? I once had the privilege of shaking the hand of an elected official. I didn’t vote for him. In fact, I disagreed with most of his policies. When I met him, I wanted to point out his errors, but I didn’t.

If I were to meet one of my heroes, Why should I feel any different? Not about my personal opinions, but why shouldn’t I meet them like the human being they are?

As writers, many of us have opportunities to meet and associate with famous people. We hold many of them in high esteem. How we react to meeting them determines how they feel about us. Do you want them to say, "Oh no, here comes that crazy lady who can’t keep herself under control"? Or "Quick let me duck under your table, her comes that guy with his manuscript again."

Just a little food for thought before you attend that major event, and meet some of those famous people. Good luck with your writing—see you next week.

This quote might be a little harder. It’s from a memoir written by two people during a very trying time in our nation’s history. Now, that ought to help. Good luck and don’t forget to comment, (whether you know the answer or not). I can’t put you in the drawing if you don’t comment.

Great post. I do think actors and other celebrities should charge a reasonable amount for a photo with them, but some are way to high. We did go to comic con and after pitting Shatner against Stan Lee - Mr. Lee won. It was a bit crazy but we were able (for an extra fee) get all seven (5 adults) family members in the picture. We'll use this on our Christmas card. The funny thing is- we could have paid the same price for one of those fancy all day photo shoots and we would of looked horrible- when we do these celebrity photo shoots (with us in costume) we all turn out looking great.

I also am a little bothered by the high celebrity photo fees. I know some very poor people who save up to go to these conventions, and then find that they cannot afford to get their photo taken with someone like William Shatner as they'd hoped to.

And the worst part is that so many of these same celebrities are left-wing quasi-socialists who hate the 1% (in spite of being part of the .01%) and demand that greater amounts of money be spent helping the poor. Well, maybe they could begin by making sure that even their poorer fans have a chance at a photo with them.

But that's just my opinion.